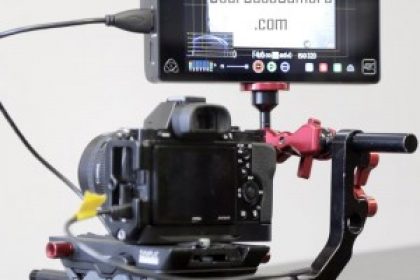 It would be easy to say the Sony A7s is one of the best video cameras on the market but couple it with the Atomos Shogun and even the Blackmagic & GH4 fanclubs can’t argue.  And sure, Sony will eventually release an A7s with 4k internal recording, but even then the quality won’t be near what you get out of this combo.  So learn to love it is what I say!

Now, setting up the A7s and Shogun together is pretty straightforward, but here’s my preferred way of doing it (as someone who builds at least a couple different rigs a day):

1) Unless you pick the right mount for it, it’s going to be a clunky setup.  Forget running a mini arm with 1/4-20 threads on a cage, because as soon as you shift the weight counter clockwise, it’ll unthread (unless you use Loctite which would be a hell of a commitment!)  For ours, I played around with a few variations, but the one I liked is simply mounting it on a Manfrotto Sympla 15mm base plate with a nice solid 90 degree arm and mini ball mount.  It lets me prop it up just above and to the side of the camera, perfectly visible but doesn’t interfere with the camera controls.  The ball lets you swing it sideways if you’ve got an annoying director or producer who wants to snoop in on your work.

2) HDMI cables still suck but what do you do…  When I set this one up, I only had a 24″ microHDMI cable, but if this was my personal rig, I’d buy one with 90 degree connections in the shortest possible length to minimize the cord dangling around my rig.  I may be old school but I like cables out the right side of cameras, not the left where they get in the way of operation, so I’d probably tape them down to the rig/arm if it was my personal rig.  I don’t really like the phone cord type cables that extend, as they exert a sideways force on the ports, causing extra wear and tear, I’d rather just buy different lengths.  Once you’ve spent $400 to replace a port, you’ll probably agree with me.  Note of course that if you’re on set, you’ll need at least 3 HDMI cables.  The one you use.  The one you use to replace the one you use when some chump snaps it out of the port and kills it.  And the one you use to replace that one when it eventually dies and you forgot to replace the first one.

3) Sunshades and cages for the Shogun…  I have a couple on order, and will be trying them shortly, until then, no opinion!

4) Batteries – I’m happy to continue using the Sony NP batteries on this. Mostly because I have dozens and the NP F970 provide a lot of power for not much buck, especially if you’re buying the high quality aftermarket ones. This seems to be one of the most common mounts for accessories these days, so it’s a reasonable investment. I’d avoid running any V-mount batteries unless they were a long P tap cable away from the monitor itself, simply in the interest of maintaining balance over your rig.

More to come as we keep working with this, but so far very happy with it! We’re renting it with a 480gb SSD and NP battery kit for $175 per day, which also includes HDMI cable and a mount to run it on whatever rail system you have.